Cycling along through highway 22 was like being inside our own horror movie! This was ugly.The pace was fast and furious. I held my breath for parts and only exhaled when I saw a friendly smile, hoot or wave. Then I knew they didn’t want to eat Tracey al a cart or Andy for their breakfast.

This highway was a disaster and this was a worry. We knew we had to find an alternative route, even though this meant a longer day, so be it! We want to be safe today.

As soon as we saw a right turn – we took it! Now we can breath again.

We cycled into the residential area of Bethlehem and this was when David cycled over to us. He asked us questions about our trip. We kind of stand out from the usual – two Brits cycling with Union Jack flags flapping around pedaling through the neighborhood. David asked – Where are you going? Where have you been?

David also helped us with directions because we were a little unsure. We can mostly rely on people who live in the area we are cycling through.

We also talked to David about the presidential election, Trump and Hillary but we’ll leave that because politics can get the best of people upset. It’ll be what it’ll be.  He even said he’d have put us up at his house if we were stopping in the area. David was a nice and interesting man! 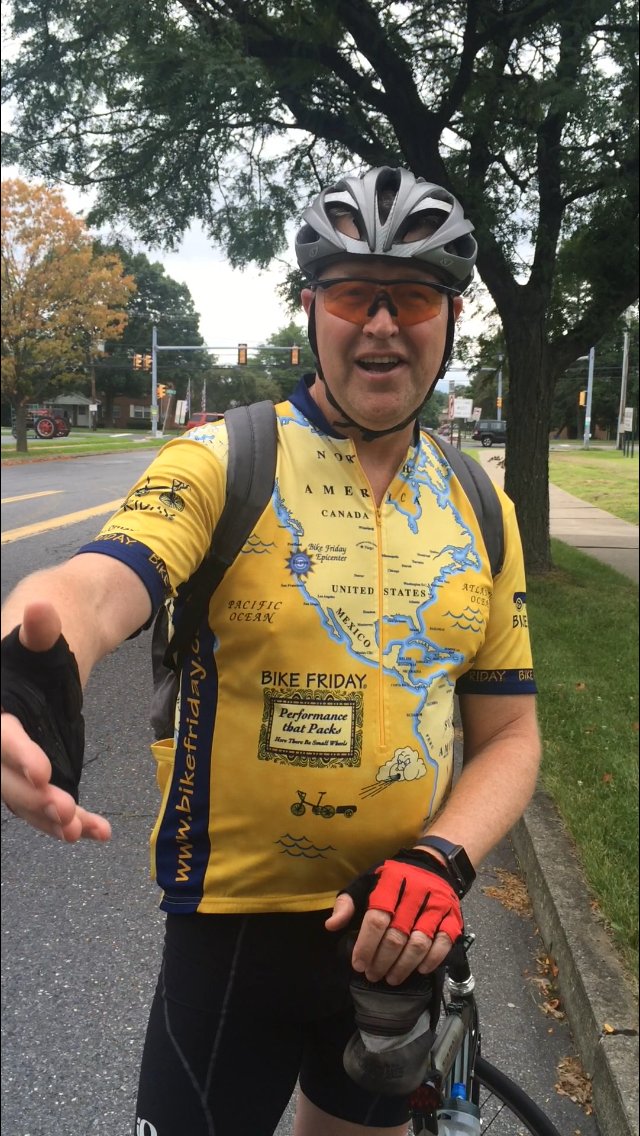 We managed around twenty five miles when Andys back wheel spoke snapped. When we looked at the wheel you could see buldges and cracks around the rim. This was bad because at any point this could have calapsed! 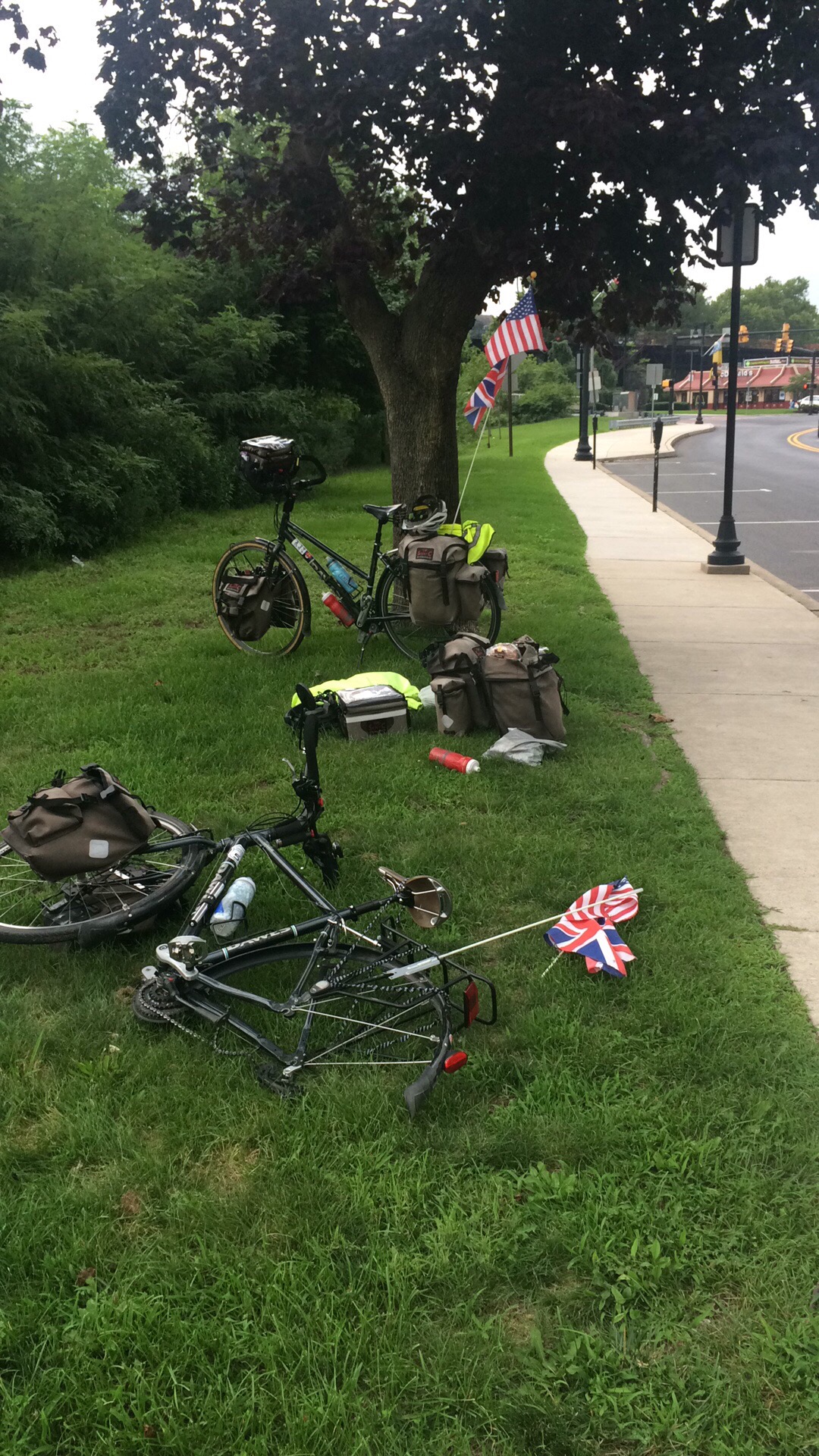 However, a super hero came to our rescue. His name is Ken and this guy pulled off the road WANTING to help. He took Andy in his car to a bike shop, paid for the new wheel and stayed with us until we were on our way. He even arranged for his girlfriend Michele to look after me whilst they were at the shop. As it turned out the bike machanic didn’t charge for his time as he too wanted to help. Unbelievable! 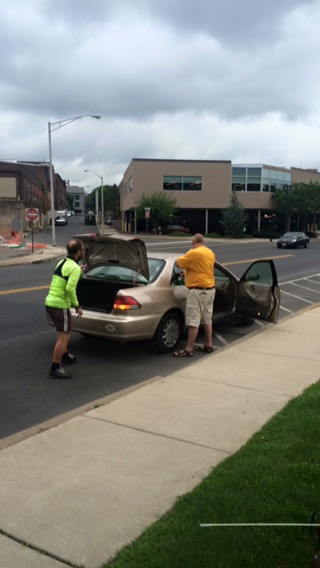 Ken, Michele and Sammy the dog. 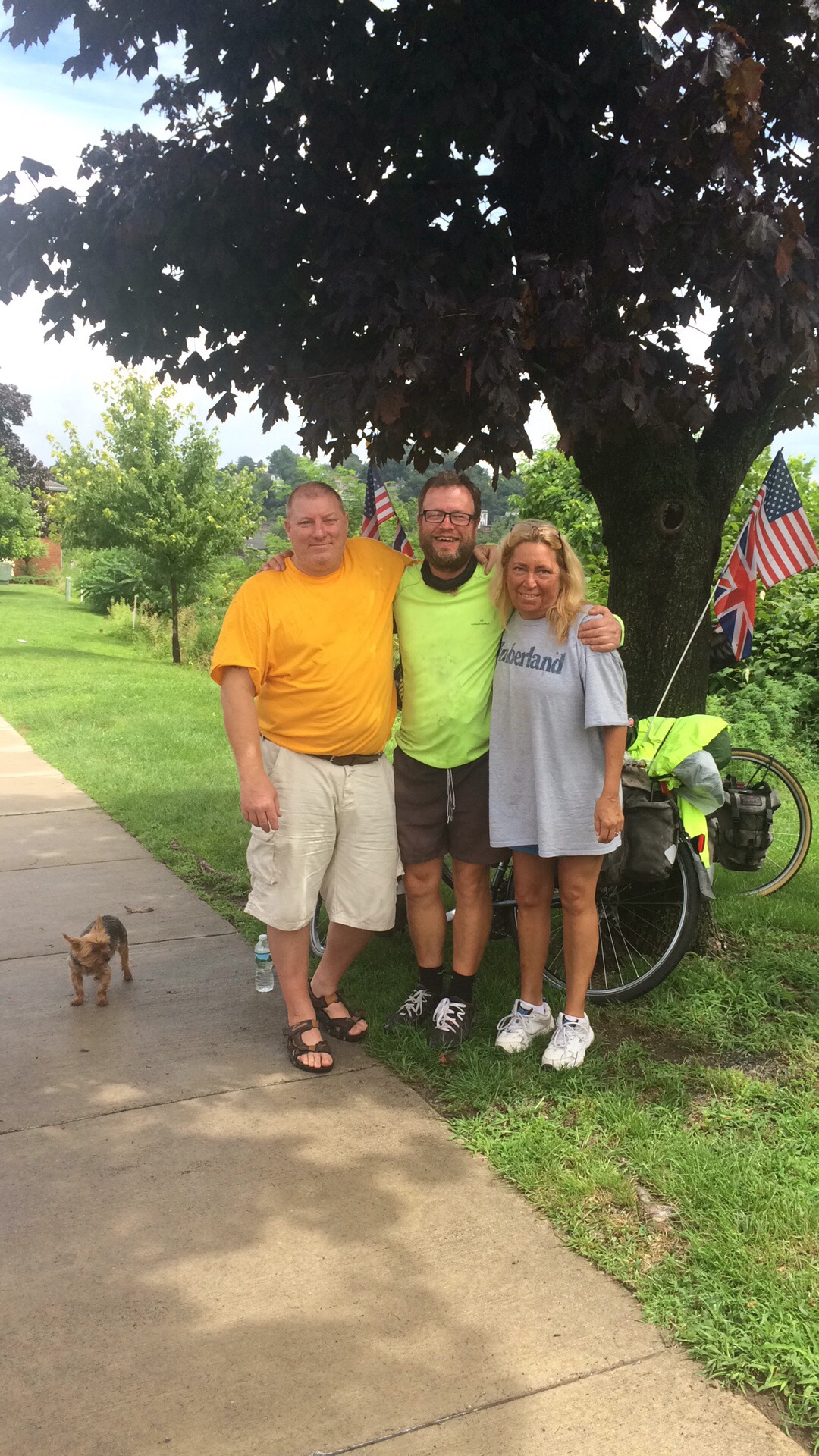 Then , wait for it , Ken insisted on helping us find a safe route out of Easton.He drove his car, with hazards flashing onto highway 57. A safer route to Denville. Even though that was remarkable, Ken met us again around twenty miles down the road – with water and to check everything was alright. There’s a good reason for this – the ROADs are busy and he cared about our safety.

As it turned out this was a blessing because Andy was feeling out of sorts. Ken is a master of communication and he persuaded Andy to take his advise about drinking an energy drink (which Ken brought with him) and to eat a banana. This worked a treat!

We worked out that we needed to cycle another thirty miles to get to Denville before loosing the light, we PUSHED on as fast as we could. 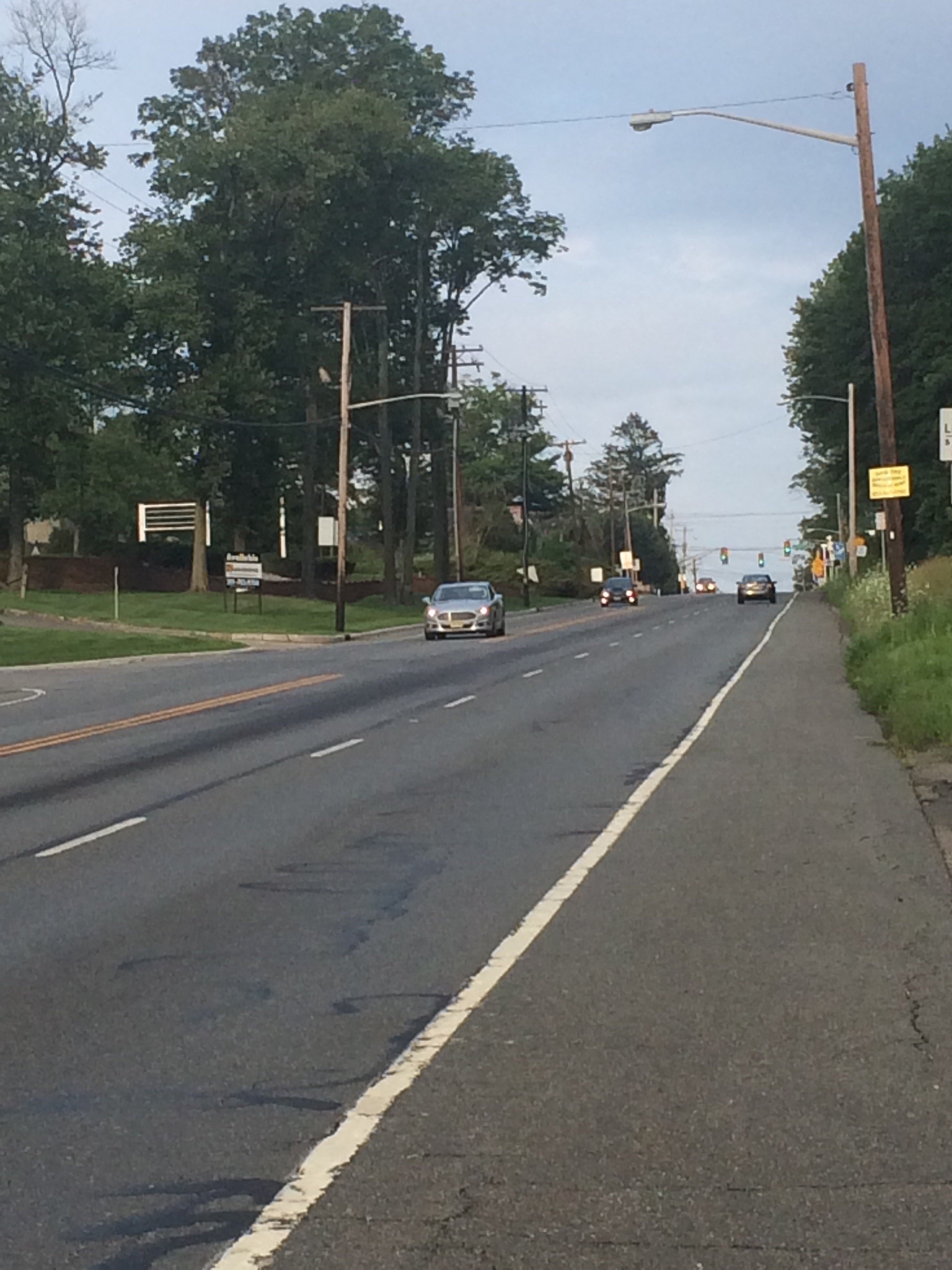 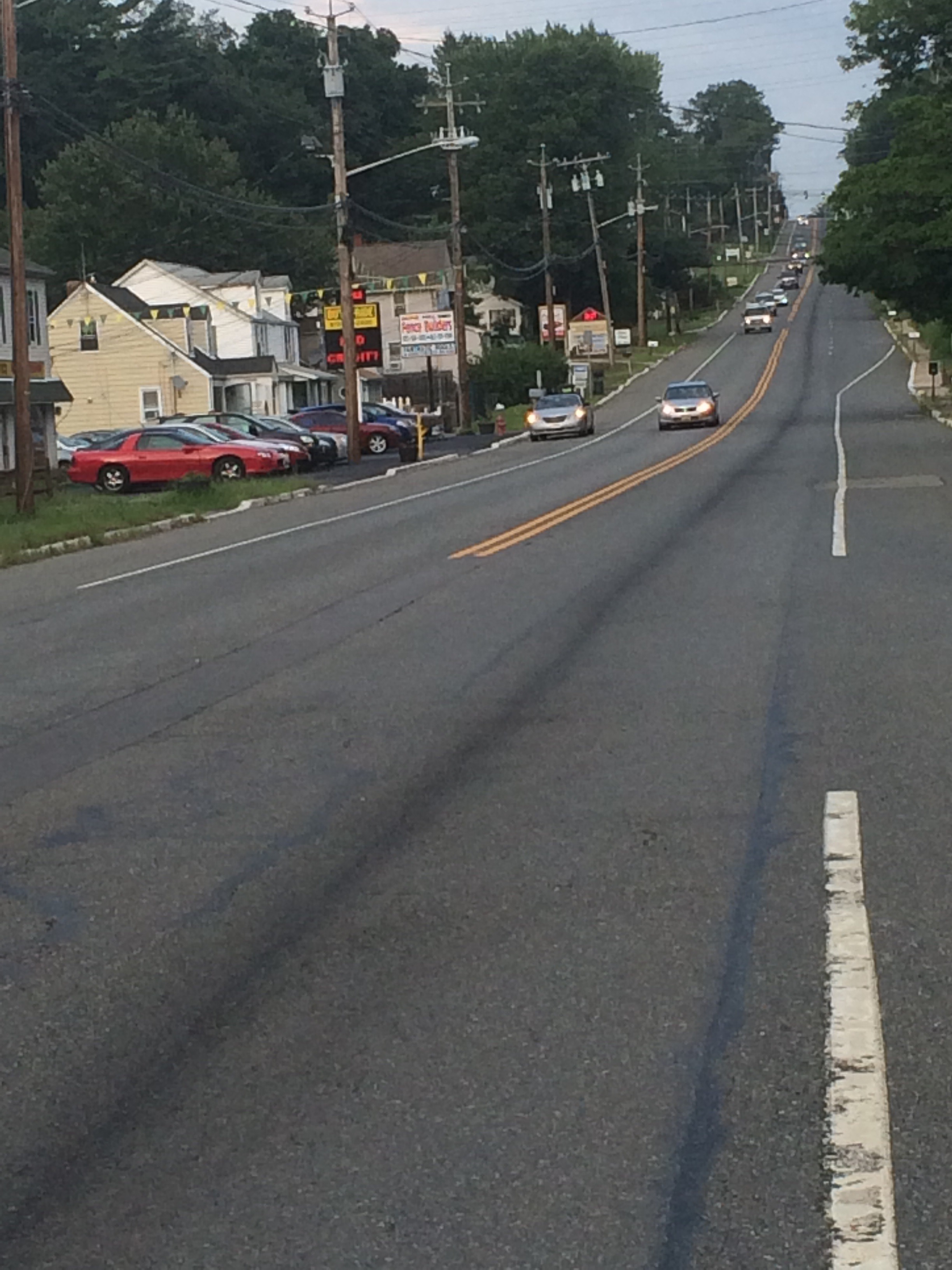 The roads were starting to become busier and two lanes became four. We waved and smiled through the traffic and it was remarkable how many people returned our advances. From young children shouting ‘look mummy’ and pointing in our direction, to adults smiling, tooting their horns or asking ‘Where have you cycled from’, to Semi truck drivers (Articulated lorries) responding to my arm gesture and hooting their horns.

We chased the light today looking for somewhere to stay. We’ve pitched the tent behind a building not too far from here.

This evening we had a lovely family pull off the road asking ‘ Where are you going and Where did you start’. They put some money into Andys hand and said ‘Have dinner on us’. Remarkable!

We’ve cycled the USA from West to East. We did this TOGETHER and even though tomorrow is our last cycling day in the USA …

WE can feel PROUD of OUR achievement because WE believed that we could do it and WE did. ‘Sometimes it takes someone believing in you to believe in yourself ‘…

Golden Gate Bridge. The start of OUR ride on 24th May.